Rock Opera '79 will come bundled with a full length rock opera adventure. Here's the blurb for it: 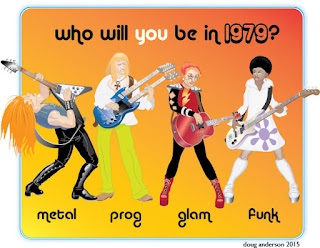 RUMBLE IN THE BEMUSEMENT PARK: a Rock Opera ’79 Libretto
Can the band get their hands on Count Popula’s enormous organ?

Count Popula was once the biggest thing on televid. His wholesome music variety show had the citizens of the New Frontier on the edge of their vinyl seats every Saturday night at 8. After daring to book some rock acts on his show, the Count was cancelled, and his showbiz days were done. He sank his fortune into an amusement park on the outskirts of Disctopia that was shuttered by day, open by night. Count Popula’s Scarecastle was a place of dazzling lights and disorienting carnival rides, suffused with the far-out tones of an unseen electro-organ, said to be played by the Count himself from a secret studio somewhere beneath the park. The teens who grew up on his show came in droves to dig the trippy scene. But rumors of guests gone mad and glimpses of shadowy figures tending the rides amid the glare soon had the youth of the city running scared. It became more of a dare than a date to pass the park’s gates. Attendance slowed to a trickle, and then, nothing, and one by one the lights winked out, and the organ was silent.

It is the year 1979. The lights have flickered on again, and the organ is playing once more — a haunting tune drifting through the abandoned park. Is the Count still tickling the keys? Has someone else discovered his secret studio? Recruited by members of the rock rebellion, the band must brave the haunted park, beating scavengers, burglars, and rival bands to the punch to uncover the mystery and retrieve a most prodigious organ that's even more than it seems.

This is an adventure that will take a group of 3–5 novice rock heroes from 0 Fame to 4 Fame. It includes a keyed map, printable battle mats, and print-and-cut counters for the heroes and their foes. The ideal introduction to the world of Rock Opera '79.
Posted by Doug at 4:18 PM