Confession: I nearly always tip my players off to the presence of a secret door, even if the dice say otherwise. Secret doors that remain secret are boring -- they add no value to the narrative and provide no suspense. But I use them often. Why? Because they evoke a sense of mystery and suspense when they're found. As I've opined about traps in a recent post, I also feel that DMs who focus on the mechanical value of secret doors are missing the point. The point of a secret door as a dungeon element is as a road sign that someone wants something to remain hidden. It's a chance to pause at the threshold and wonder what's so important behind there that it merits concealment. It gets interesting when you open it.

The only time I make a secret door hard to find is when the players have been tipped off to look for one. Then you can make finding it (and possibly unlocking it) a part of the narrative. Case in point: in an adventure I'm writing, the PCs are told that in a certain room there's a secret door that will allow them to sneak into the bad guys' lair. The adventure becomes about figuring out how the door is concealed and how to open it, rather than a matter of rolling dice until it's revealed. The best kind of secret door is like the Gate of Moria, when you know where it is, but have to sweat a little before you open it, and hey, what are those ripples coming from the pond?
Posted by Doug at 5:54 PM 2 comments: 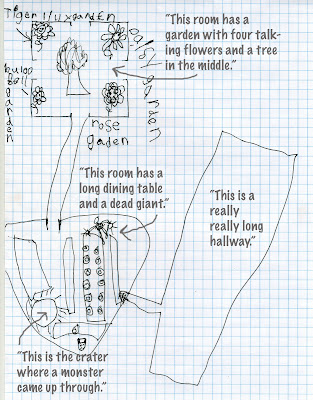 I've been working on a DungeonTeller campaign, as I've mentioned before, and my favorite lil' gamer is getting into the act. Feel free to run this as an adventure or expand it. Some questions that remain: What killed the giant? Who was the big feast for? What's down that really, really long hallway -- should I check for secret doors?

[Flavah Menu] Why You're in The Tavern

1. You're on the run from the law, and you figure the town watch isn't going to follow you into a dungeon just to arrest you for shoplifting.
2. You're desperate to strike it rich to save your family from financial ruin and prove you're not the ne'er-do-well they say you are.
3. Your beloved aunt or uncle disappeared into a nearby dungeon and you want to find him or her.
4. You helped a crazy old galoot across the street and he gave you a treasure map to this place in return.
5. You believe you're the rightful heir to a fortune said to be hidden in the dungeon and you have an heirloom to prove it.
6. You believe a fugitive responsible for the death of a family member is hiding in the dungeon.
7. You're working for a wizard who is paying you to recover a lost artifact.
8. Buy me a drink and I'll follow you anywhere.
9. Your best friend here [pick another motive from this list] and if that's what he wants to do, that's good enough for me, too. We're a team.
10. See this scar? I'm going to get the villain who gave that to me when I was a lad.
11. Exterminate the brutes. Every last one of them.
12. If I bring back the trinket for them, they'll let my family go free.

I love this guy's artwork. I won't reproduce his work here out of respect for artists' rights, but do yourself a favor and take a look if you're feeling short on inspiration.

Judas Priest fan as I am, I was just over at Rob Halford's web site, where he bills himself as the "God of Metal", and who am I to differ, considering his near-immortality and superhuman vocal prowess? Well, it got me thinking about what a pantheon of "metal gods" would look like in a D&D game. My first thought is that you'd have two opposing sides: one, the chaotic Metal Gods, who exist "to rock", and the lawful Authorities, who oppose "rocking." To make it interesting, the metal gods would include both good and evil chaotic beings, while the Authorities would be strictly lawful neutral.
Posted by Doug at 6:13 PM 1 comment:

A giant caterpillar that attacks by surprise.
Luck 10
Armor 0
Move 4                      climb, dig
Battle 6                      bite
Muscle 5
Notice 5
Resist 3
Sneak 5
Powers                     Ambush
Crypt worms are bloated, ivory-colored caterpillars about 6 feet long, with charcoal-gray heads and black legs. They tunnel through graveyards and catacombs, looking for recently-buried bodies. They often compete with ghouls and tend to attack them on sight. They attack living prey, too, preferring to strike out at passing targets from a hole or crevice. They can spin a line of strong silk from their abdomen to dangle from a ceiling or tunnel opening, ready to drop on unsuspecting prey.
If a crypt worm makes a successful Sneak roll against its target’s Notice roll, it can immediately make a Battle roll with 4 bonus dice, like a rogue’s ambush power.
Crypt worms are the larval form of death’s-head moths, which are described under their own entry. They build a hard cocoon out of silk and human bones , and emerge in their adult moth form after a period of a few weeks.

A giant flying insect that is attracted to lanterns and other light sources.
Luck 8
Armor 0
Move 2         climb 2, fly 8
Battle 4        bite
Muscle 3       +3 when sucking blood from a victim
Notice 5
Resist 2
Sneak 6
Powers                     Luck Drain 1/turn
Death’s-head moths are the adult form of crypt worms, which are described elsewhere. They have bodies about two feet long, and a wingspan of nearly four feet. These giant flying insects are a constant nuisance to underground exploration, because they are attracted to artificial light sources like lanterns, torches, and the powers starlight and will o’ the wisp. They tend to drop from ceilings and swarm around the lights, searching for live prey. Their proboscis is modified to suck blood, and once attached, will drain one Luck from the victim each turn until the moth is slain or else pulled off with one or more successes on a Muscle roll.
Posted by Doug at 4:45 PM No comments:


When you're naming something, there are three ways to go.
You can cram two existing words together to create a portmanteau word.
You can literally describe the thing you're naming, or at least an aspect of it.
You can make up gibberish.


I don't do gibberish, because it doesn't evoke anything in the players' minds unless you explain that "A'Sharz-go" means "Desert of Glass Shards" in the Hiza tongue, Hiza meaning "footsore wanderers", and so on. Tolkien was a philologist and beautifully realized invented languages were a big part (in fact the original impetus) of his legendarium. I, on the other hand, am not a philologist. It's really hard to do invented language right, so I stay away.
Posted by Doug at 6:34 AM No comments:

This schematic represents the DungeonTeller campaign world I've been working on. The starting city, Stormgate, is at the lower left. Blue lines mean sea routes, and brown lines mean land routes. The color of each zone indicates its relative level of challenge. Green is safe even for starting characters; yellow a little challenging; orange quite challenging; and red is nasty indeed. 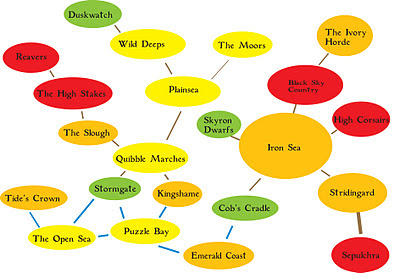 I have been mapping this way for years, rather than with the usual method of drawing a continent and then filling in all the bits. I don't make a traditional Tolkien-esque map until the end of the design process, and that's mostly as a prop for the players, not for me.
I see each zone as a room in a dungeon, with one or more exits, and a list of contents, including monsters, NPCs, and locations. Often I'll rate a zone with a number that indicates how many days' travel it takes to cross it. Some places (and exits) might require the equivalent of a Spot check to find -- this makes rangers VERY useful during overland travel.
Of course, schematic maps are of no use for adjudicating hex-crawling wilderness travel -- but that has never worked for me as a DM. I remember buying the Judges Guild Campaign Hexagon System booklet (1977) and then literally getting bogged down drawing tiny swamp/marsh symbols, making sure streams didn't flow uphill, carefully lining up the details in adjacent hexes... None of that made any difference to my players, but the rallying cry of the day was "realism!", whatever that was supposed to mean in the context of a fantasy game, and golly, if I just drew my maps down to the smallest detail, then my campaign would have the ring of truth.


So here's my process in more detail, in case you want to try it, after the jump:
Read more »
Posted by Doug at 6:39 PM 6 comments: