If you know what dungeon this is from, you're old-school. Or maybe just old.

Bosun's chair. Evil mouth that spits victims into the abyss. I'm on a roll. 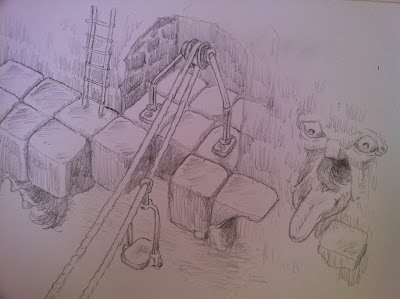 I've done a bunch of these in the past week to go along with a dungeon I wrote for the next Dungeonteller book. 25mm figures for scale. Interesting anamorphic effects depending on the camera angle. 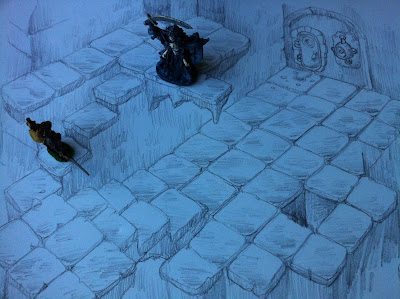 The FLGS That Levelled-up into a Non-Profit Youth Center

"In 1996, Ray and Patricia Estabrook opened a retail store, All About Games, in Belfast [Maine]. Shortly after All About Games opened, the Estabrooks found their shop filled to bursting with youth of all ages who wanted to play (or learn how to play) non-electronic games. They tried to incorporate the game playing into the running of their store, but  eventually realized their store could not be a business and a youth center at the same time. Instead of just kicking the kids out and going on with their lives, they saw that there was a serious need for a place for the youth of Belfast to go and decided to do something about it..."

So they morphed from a gaming store to a non-profit youth center. And they're still going strong today. In fact, they just got their independent IRS non-profit status so that donations can be made directly instead of through an umbrella organization. You can donate here.

The Game Loft runs table-top games for local teens, often integrates military history and local history into their activities. They run LARP combats, MtG tourneys, you name it. They even feed the kids hot dinners.

OK, here's my challenge to you. Choose your own adventure:
Posted by Doug at 6:40 AM 2 comments:

New harpy illustration for the Dungeonteller monster book. I've been looking at shopping Dungeonteller to several non-RPG publishers who do more mainstream game/puzzle books, but it that doesn't pan out, I'll still put out the next iteration of the game as a POD physical book or PDF. Meantime, enjoy.

These aren't scans, just quick snaps from my cell phone: 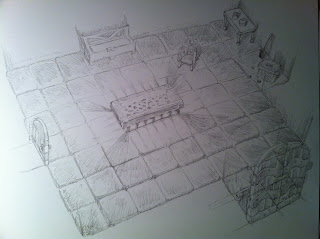 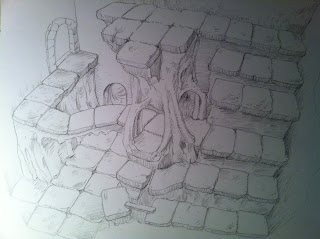 Good to be back after a long fishing holiday. Doug 1, Trout 0. I've created nearly all the monster illustrations for the monster book, and I'm working on another Dungeonteller adventure. This adventure will be bundled with the next version of the rulebook, and will include 25mm scale perspective maps that you can use with miniatures or improvised counters: 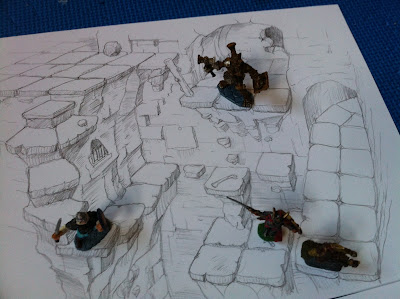 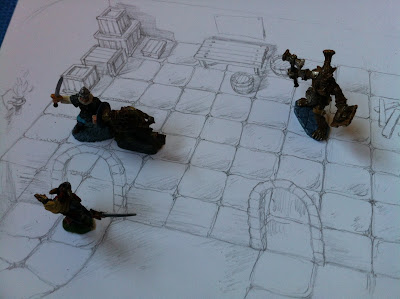 Each map can be printed on a standard piece of paper or cardstock. The style is 100% compatible with the cutaway dungeon maps I've been posting here for free. Of course, there's a master map that shows each battle mat in relation to the whole dungeon. You can mark 'em up, color on them, write notes. And they are VERY stingy on printer ink. The effect is pretty wow.